While we refer to colours with specific names (such as: red, green or blue) in truth colours do not seem to have specific ‘identity’. They are not ‘separate’ from each other, and do not exist in ‘isolation’. Rather they affect each other and depend on each other [1].

Colours can even change their perceived hue when other colours (and shapes) sit next to them. For example, the two light-blue colours in the illustration below are exactly the same. Their RGB value is exactly the same (R118, G154, B204). But if you compare them, you will notice that the right blue looks slightly darker than the left blue… The colours shift. 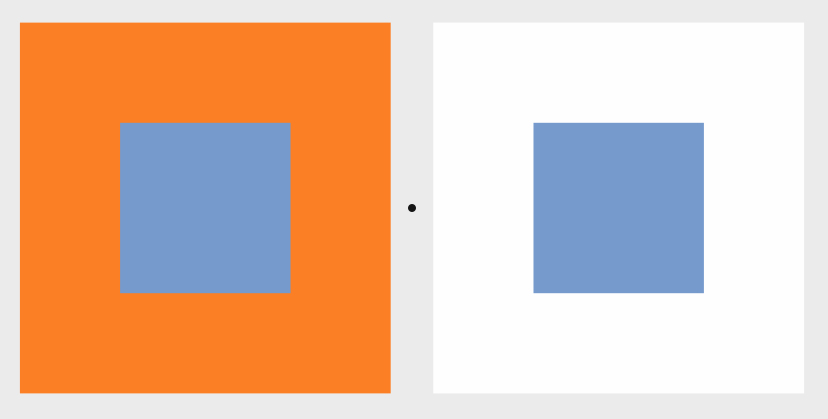 Illustration 1: The left blue square looks lighter than the right one, even though both blues are exactly the same.

The illusion is created because colours are affected by adjacent colours. The blue squares have different colours around them – orange colour on the left, and white on the right. Both blues are the same, but they are affected by other colours and so they ‘shift’ slightly.

The principle of the illustration above is well known. I have added to it the small black dot in the space between the squares to create a focal point. Instead of looking at one square, then at the other, you can focus only on the middle black dot. Then, try to ‘notice’ both blue squares. You will see that the illusion still occurs.

This demonstrates that the illusion exists arises even when your eyes are fixed on one dot. The illusion is not caused by your eyes moving from one square to the other.

“In reality there is no definite place on the colour spectrum where you can draw a square and frame a colour within it. All colours are in relations to other colours. They sit side by side, diffusing one into the other. So there is always a difference between the beginning and the end of a colour.” [2]